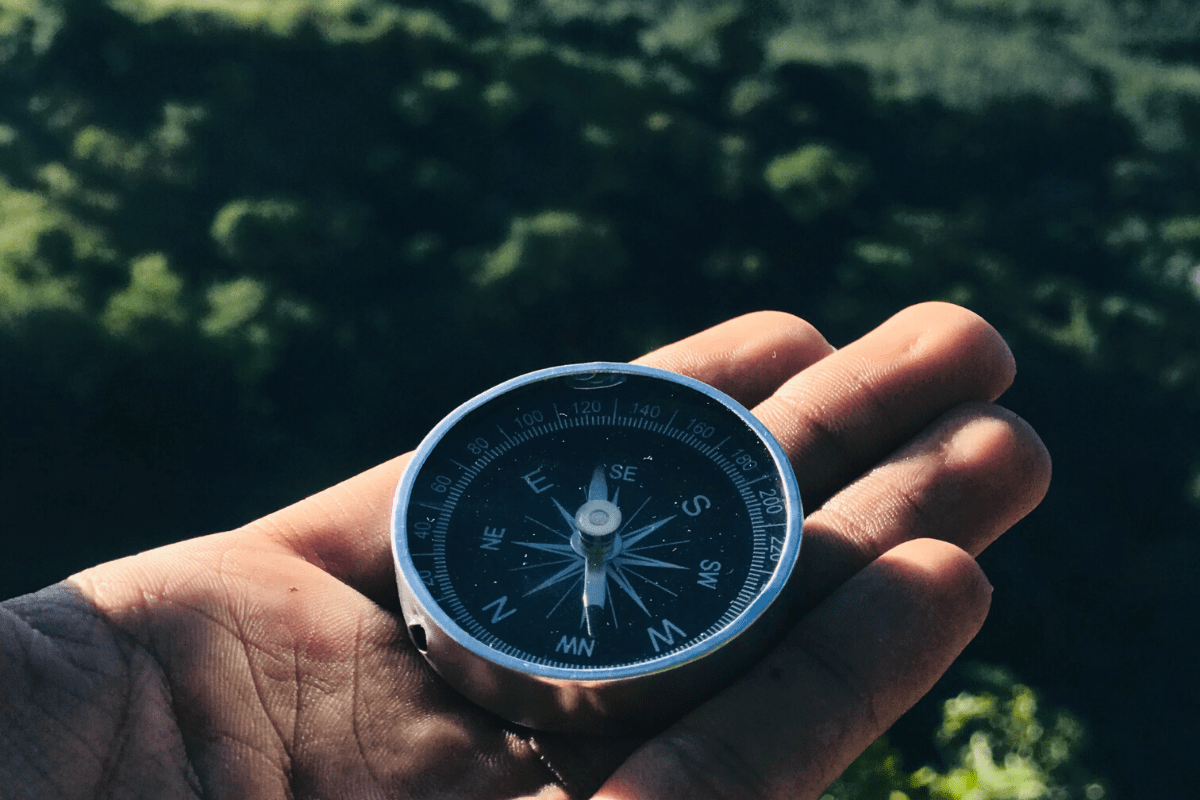 Being able to read a topographic map with a compass is a bit of a lost art. In fact, being able to read a map (the kind printed on paper that you can fold up and put in your pack) at all is a skill that many don’t possess anymore.

Nowadays turn by turn directions are available right on our phone. Even our smart watches can be equipped with hiking maps.

But, what happens when that watch runs out of battery or your phone loses service? Sadly, many of us are one dropped phone and one wrong turn from being hopelessly lost in the wilderness.

This doesn’t have to be the case!

Knowing how to read a topographical map with a compass is still a needed skill in the twenty-first century. In fact, a map and a compass are two of the things that you should always pack with you even on a day hike. While topographic maps can be intimidating to look at at first, they’re not as hard to understand as you might think.

In this article, I’m going to teach you what a topographic map is and how to use it along with it’s tag team partner, the compass.

What is a Topographic Map?

A topographic map is a two-dimensional map showing both the natural and human-made features of an area. For example, it can show the route of a city, and it’ll explain everything around it. It can show a hiking trail and the landscape around it. It shows the paths, and it can show mountains, roads, rivers, and lakes. It shows vegetation and trails along the area for the map.

A topographical map isn’t limited to nature trails. The map can show city and street maps and the area around the city. It’s one of the most useful types of maps the average person can learn to read.

Topographic maps show elevations around the area called contour lines. These show areas that could be a hilly or uneven area. These maps help hikers and campers find the right spot for a place to camp. It can help new college kids make their way around their new campus. Some campuses have more hills than they let on. We’ll get into more detail about how this can help you read the map of the area later.

A topographic map is used in many situations:

Other than contour lines, there are marks on the map that mark wooded areas as well as railroads. City maps are a form of topographic maps too. At the bottom of the map is a distance scale. The distance scale will tell you how many miles are in an inch. Once you measure how far you are from Point A to Point B, you can figure out how long of a walk or a drive you need to make to get where you need to.

At the bottom, you’ll see different symbols and colorings around the maps. In the bottom corner of the map, it’s called a legend. The legend tells you what the various symbols of the maps mean. We’ll go into more detail about how to use the title later.

How to Read a Topographic Map

When you’re reading a topographic map, there are three factors you need to look at for the most accurate reading:

Contour lines make a topographic map special and unique. They make the two-dimensional map look three-dimensional. The closer the contour lines are on a map, the steeper the terrain is. If the lines are farther apart, it’s not as steep in the ground. It’s more of a gentle hill than a mountain. Every five lines, you’ll see a number. That’s the elevation of the area. The distance between the lines is usually anywhere between 40 – 80 feet.

At the top of the mountain, there are circles up top. The smaller circles are the peaks. The bigger rings are gentle hills. REI suggests to get a map of an area you’re familiar with and look around on the map to see if you can pick out the peaks and hills in the area.

As we mentioned earlier, the scale will give you an idea of the size of the area. The smaller the scale, the lower the field. There will be more detail in the smaller-scale maps than in the larger-scale maps.

To get a rough idea of the distance of your hiking trail, you can take your compass and a string and put it at the edge of the map. You’ll have a rough estimate of the hiking distance on the map.

As we mentioned above, the legend has different symbols on the map and tell you what they mean. For example, if you’re going up a steep hill and find lots of green on the map, that means there’s vegetation there. The darker the green, the denser the area. The area could be trees, ferns, or various other plants that are along the trail.

Reading a Topographic Map with a Compass

Now that we know how to read the topographic map, we can add the compass to it. A compass is a tool that no hiker, camper or backpacker is willing to go without. Even if they have a compass on their phones, they’re going to buy a compass they can hold in their hands.

A compass has a unique design to help backpackers read a map and get an accurate reading of where they are on the map and the distance it takes to get from one landmark for another.

To use a compass on a map:

Learning how to read a compass and topographic map is a skill. It’s going to take time and practice to get good at this skill, the same as learning how to ride a bike and making a campfire. To build your confidence, go to a common area to practice reading a map and a compass. When you get better at reading maps and compasses, you can try hiking in a less usual territory.

Over time, you’ll get so confident you’ll be able to walk into an unfamiliar area and navigate it as you lived there.

Even with cell phones having maps programmed in them, being able to read a map with a compass is a valuable skill. Phones can die. Data could be near impossible to get if you’re in an area that’s a dead zone. You will never worry about being lost once you’ve mastered the skill of reading a compass and a topographic map.

To be honest, you may rarely ever have to pull out the map and compass while you’re hiking.

However, like with most essential hiking items, they’re only essential when you absolutely need them. A firestarter isn’t necessary until you need to get a fire started once you realize you’re going to be spending a night in the woods you didn’t anticipate. A LifeStraw isn’t essential until you need to filter clean water in an emergency.

The same holds true with a topo map and a compass. It’s always better to have it and not need it, rather than need it and not have it.

Stay safe out there!

I love hiking and being outdoors with Jen and our two rescue dogs, Chompers and Mia. I also enjoy a good weekend trail run. I'm also really enjoying sharing some of the knowledge we've learned along the way here on Zenful Hiking!

link to The 3 Best Hiking Apps on your Apple Watch

The technological capabilities of the Apple Watch have increased exponentially in the last five years. By using hiking apps on your smartwatch, you have immediate access to a library of popular...

You're planning a Saturday afternoon hike on the trails and you're researching what to bring on a day hike. First off, kudos to you because you've already passed the first step. Planning and prepping...

Hi, we're Jen and Ryan. We both fell in love with hiking and being outdoors and incorporate hiking into every trip and vacation we can. Zenful Hiking is our way to share our love and knowledge of hitting the trail so you can also have your moment of Zen.